Space Waste Transporter: Going Where No Garbage Man has Gone Before

With today’s ever increasing number of falling satellites, the need to find alternate solutions for disposing space debris is dire. John D. Arwood, a Native American and owner of Arwood Waste, proposes a viable solution to safely clean up our atmosphere. 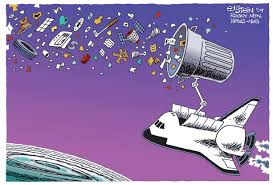 Arwood Waste has proposed a space waste contract to Together Waste for the collection and disposal of space junk using NASA’s decommissioned space shuttles. This innovative contract outlines an orbital junk removal program, which Arwood is calling, the Space Waste Transporter.

The Space Waste Transporter is essentially a rocket-propelled garbage truck designed to launch into orbit and immediately go to work cleaning up the ever-growing cloud of decommissioned satellites, shuttle debris, garbage and fragments.

NASA’s recently decommissioned space shuttles, with their large cargo bays and proven track record, would be ideal vehicles to accomplish this task. These shuttles would become a type of “space waste collection vehicle.” After the Transporter collects debris, it will return it safely back to earth where its cargo can be properly disposed of or recycled.

Although most of the falling trash is burned up upon reentry, often charred remains of the junk too large to burn are sent spraying down to earth, endangering as large as a 500-mile areas. As more and more satellites expire, experts say it is only a matter of time before these unpredictable and out of control chunks of trash will fall on populated areas causing serious repercussions.

Additionally, scientists do not know the long-term effect of re-entering space debris to our atmosphere. “Could these man-made machines, continually burning through our stratosphere, slowly change the climate of our sky?” Arwood raises the concern.

The need to safely clean up our littered atmosphere is now greater than ever. As with the energy crisis and global climate change, leaving the issue of falling space junk unaddressed will only compound the problem for future generations.

This reality brings John D. Arwood to explore new and creative solutions. As an entrepreneur, Arwood got his start collecting and recycling used metal from factories. He now is the president of Arwood Waste and has been recycling debris since 1984. “Collecting waste in outer space should be the next step for this industry,” says Arwood.

Reusing the space shuttles, dubbing “Space Waste Transporters,” is a real and eminent option to solving this problem. The technology is already built, already tested and already available. Arwood’s space waste transporter program is prepared to collect these decommissioned satellites and bring them safely back to earth where they can be reused, recycled, or preserved.

“This space junk is just another example of misguided disposal of trash. We sent it up there. We need to bring it down,” said Arwood. He is taking the old adage, “what goes up must come down” in a very real sense. “Recycling has always been my passion. Let’s work together to clear up our skies.”