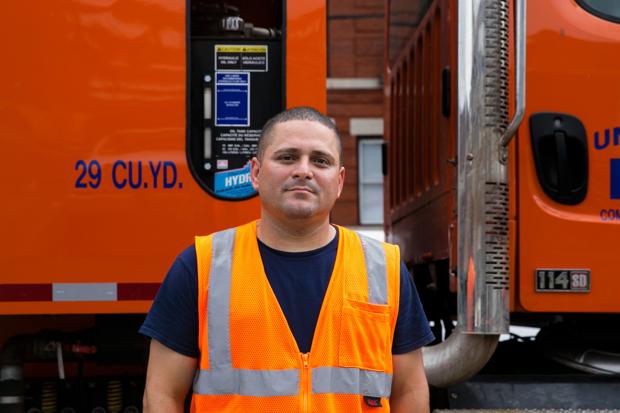 Ray Machado’s work day typically begins at 7 a.m. Five days a week, he traverses the streets of Union City, hauling away its curbside refuse, as a garbage truck driver with the Department of Public Works.

A glamorous job, it is not, but it’s only part of Machado’s story.

He’s also one of the pioneers of a musical sub-genre that kicked the door in on Cuba’s music scene in the 2000s — a glorious but bittersweet decade for Machado that culminated in his self-imposed exile to the United States 12 years after his reggaeton group arose from a tiny neighborhood in Santa Clara, Cuba.

“It was a genre that was against all norms, not only against the traditional music (of Cuba), but all norms — against the politics, TV, radio, the status quo,” Machado, 41, said. “It was a whole new movement.”
He speaks fondly of that time, but with a sense of bitterness toward the forces that he says prevented his group from reaching peak success in his home country.
Eventually, his group disbanded in 2011. After the Cuban government censored one of their lyrics and barred them from performing or appearing live for eight months, Machado had had enough.
He boarded a plane and landed in New Jersey, where his father and brother were living. He left his band mates, friends and mother, Elba, in Santa Clara.
He thought he would never perform again.
But seven years later, the group dubbed Maxima Alerta is reanimated. Now, when he’s not driving his garbage truck, he’s making music.
Maxima Alerta has released four singles since 2014 and plans to release a new track in September. They’re also putting the finishing touches on a full album.
But the group remains the same in name only. The other original members are still in Cuba, while Machado’s new group is made up of musicians he’s met in the United States. 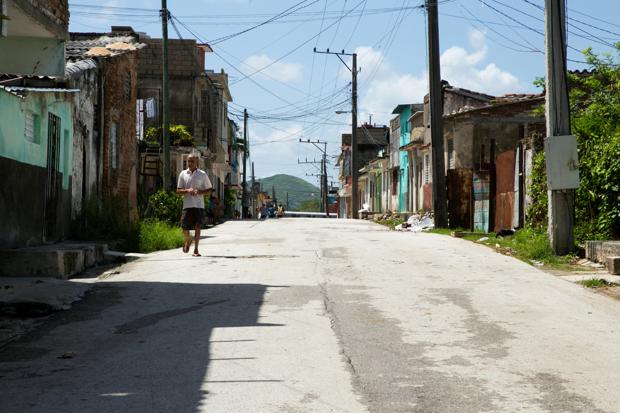 Aleman, Santa Clara, Cuba. (Photo courtesy of Chad Servidio)
In the mid-1990s, as reggaeton emerged from Puerto Rico and Panama and swept through the Caribbean, Machado was a young man with a passion for music.
In 1999, on a narrow street named Aleman near the center of Santa Clara, neighbors and friends discovered reggaeton and liked what they heard. A three-hour drive southeast of Havana, Santa Clara lies deep in the Cuban countryside. It famously seats the mausoleum of Cuban revolutionary, Che Guevara.
“It was a new force of music we wanted to explore,” Machado said from the Las Brisas Cafe in Union City. “The desire to succeed and break out of our small city — that was our drive.”
Reggaeton emerged during the golden age of hip-hop and combines dance hall rhythms with both rap lyrics and vocals sung or spoken in Spanish.
Machado and company took the genre and made it their own. Maxima Alerta, along with several other bands formed in the country during that time, including Cubaton 20.02, ushered in a sub-genre now called Cubaton — reggaeton infused with elements of Cuban music.
Maxima Alerta started with four vocalists: Machado, Marcos Daniel Prado Morell, Francisco Pantaleaon Morales, and Yoslyn Aleman Cabrera, as well as a DJ behind them.
Backing them was Duniesky Alfonso Herrera, a grassroots producer who recorded the group’s music and first started distributing it to an audience. 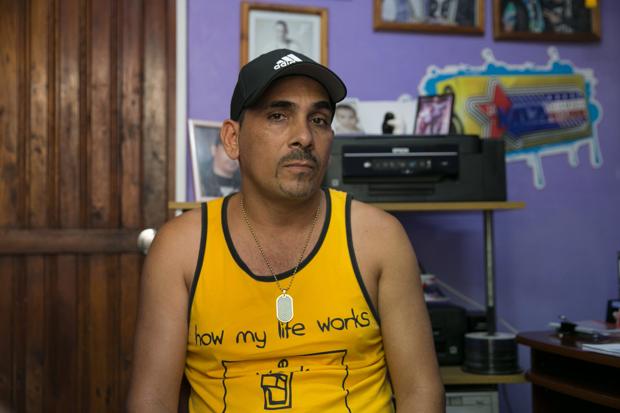 Duniesky Alfonso Herrera (Photo courtesy of Chad Servidio)
“It was a very local setting at the time,” Herrera said in Santa Clara through a translator. He sold CDs — or, sometimes, just left them on doorsteps or in mailboxes.
People started listening. Their first single, “Echar Pa Lante,” “put them on the map,” Herrera said. “That was kind of the beginning, a move forward.”
From there, the band grew in prominence. In 2005, more musicians were added, including a percussionist, saxophonist and trombone player.
They packed festivals, toured the island and developed a broad audience. They sometimes played three or four sets in a day, Machado said. And in 2006, they were nominated for best CD in dance/hip-hop at Cubadisco, a prominent award event celebrating Cuban music. 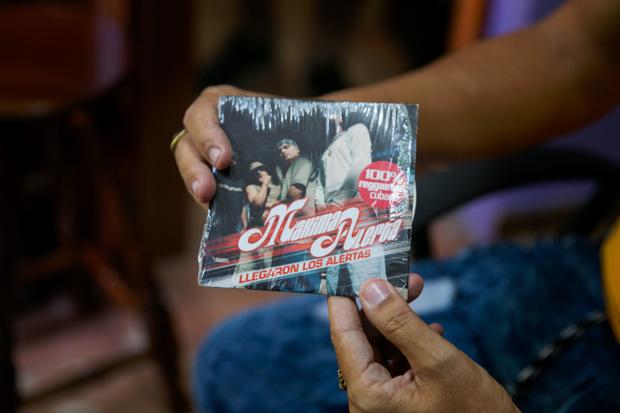 (Photo courtesy of Chad Servidio)
“We went on more than 21 TV programs (in Cuba)… We were number one, at least here in Cuba,” Cabrera said in Santa Clara through a translator.
But they consistently found trouble with the government. Band members insinuate there were many attempts to stop them from reaching a broader audience.
“When reggaeton came about, there were a lot of forces against that kind of music,” Machado said. “We encountered censorship… hard times trying to get our music out.”
“Every time we appeared on a TV show, we would have to give them the music and there was a committee for each TV show and they analyzed the songs and the lyrics to make sure they were appropriate,” he said. “Sometimes they wouldn’t let you sing certain songs because they wouldn’t let you speak about different countries outside of Cuba.”
Band members describe politically subversive attempts to stifle them from performing. They say a European tour lined up was abruptly canceled for no apparent reason.
It eventually caught up to them.
“Even today, I don’t even know exactly why (we were censored),” Cabrera said. “There was no big deal. 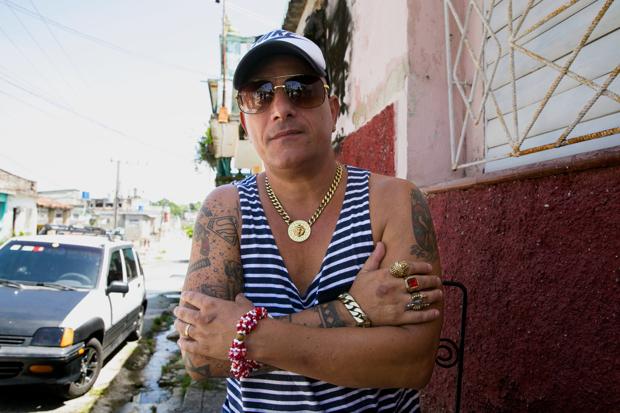 Yoslyn Aleman Cabrera. (Photo courtesy of Chad Servidio)
“La nina quiere un Yuma, la nina quiere un pepe, que la llevo para Europa, le compro carro y le dio billete.”
Roughly translated, the lyrics from the song “La nina quiere un Pepe” describe a girl who leaves Cuba with a foreigner, gets some money and, upon her return, feels she’s above the people in her home country.
Not exactly a call for a political coup d’etat, but the line prompted the Cuban government’s National Institute of Music, a subdivision of the Ministry of Culture, to impose an eight-month censorship on the band in 2011, Machado said.
For almost a year, Maxima Alerta was barred from performing, producing music, or appearing on TV shows and radio stations, he said.
“We always felt that it wasn’t only the censorship of the song; I felt there were people behind that to push us out,” Machado said.
His mother, Elba Gomez, remembers Machado returning home from a meeting with the Institute of Music.
“I can’t get it out of my head, the expression on his face,” she said through a translator. “He felt very strongly that no one was respecting him.”
So he left.
“Even if they would have allowed me to perform again, I didn’t feel like staying,” he said. “I felt very embarrassed.”
He boarded a plane with his wife and two daughters and in 2011 settled in Hudson County.
He and his family lived in a basement apartment on Jewett Avenue in Jersey City, where he worked as a super for the building. They lived with his father, Ray Machado Sr., who worked as a sound engineer for Union City.
“I had stopped writing music. I had stopped performing. I never thought it was going to happen again,” Machado said. “That was another part of my life; that chapter in my life had closed.”
He began to settle into this new chapter. He moved into a new apartment in West New York and eventually began working for the Union City DPW as a garbage truck driver — a month before his father died.
During this time, a band called Gente De Zona came to perform in Union City. They had asked Lucio Fernandez, a Union City commissioner, to emcee the event. Machado, who had met Fernandez through his father, mentioned that, once upon a time, Maxima Alerta produced a song with Gente De Zona in Cuba.
“And I’ll be honest with you, I didn’t buy it,” Fernandez said. “But I researched a bit, and I said ‘Oh my goodness, it’s true.'”
They started talking more about his old band and why he never reconstituted it. Where would he find musicians, Machado would lament. “I have no place to rehearse.”
“So I said, ‘Well, I’d love to help you,'” Fernandez said.
By Corey W. McDonald | The Jersey Journal
Posted: August 20, 2018/No Comments

Get Off Drugs | Waste and Recycling Workers Week Sponsor