Pat DiNizio, the songwriter and lead singer for the durable New Jersey rock ’n’ roll band the Smithereens, whose melodic, guitar-heavy songs like “Blood and Roses” and “A Girl Like You” attracted a loyal following, died on Tuesday in Summit, N.J. He was 62. 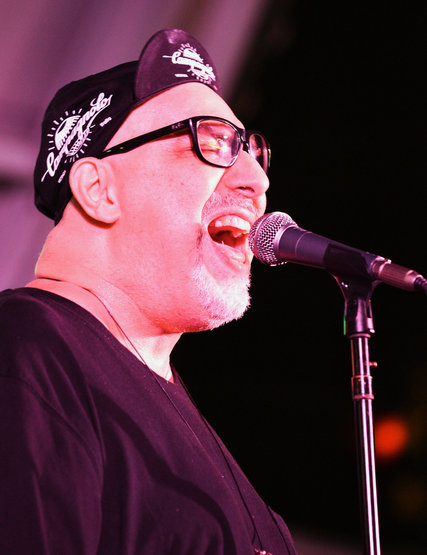 His death was announced on the band’s website. A friend, William King, said Mr. DiNizio had been in physical therapy after several falls in September.

Mr. DiNizio, who also played rhythm guitar, formed the Smithereens in 1980 with three other young men from New Jersey: Jim Babjak on lead guitar, Dennis Diken on drums and Mike Mesaros on bass. (Mr. Mesaros was replaced by Severo Jornacion in 2006, though Mr. Mesaros still performed occasionally with the group, most recently this summer.)

They soon started performing original songs, most by Mr. DiNizio, at clubs like Kenny’s Castaways in Greenwich Village, but it was years before they received a record deal.

“I was beginning to entertain the notion of pursuing other things,” Mr. DiNizio told The New York Times in 2004. “I had already turned 30, and no one was interested in the band.”

The Smithereens eventually signed with Enigma Records and released their first album, “Especially for You,” in 1986. It featured catchy rock songs like “Blood and Roses” and “Behind the Wall of Sleep,” which garnered radio play and helped the Smithereens begin to build an audience.

The group broke into the Billboard Top 40 in the early 1990s with the power ballad “A Girl Like You” and “Too Much Passion,” which had a new-wave feel.

The Smithereens – “A Girl Like You” Video by Andy-O
Grunge soon overshadowed more traditional rock acts like the Smithereens. But Mr. DiNizio and his bandmates refused to quit, working day jobs when needed and performing constantly, sometimes opening for internationally known artists like ZZ Top, Blondie, the Pretenders and Lou Reed. Mr. DiNizio also performed solo in fans’ homes.

“That’s been the credo of the band,” Mr. DiNizio said. “You never give up.”

Patrick Michael DiNizio was born in Plainfield, N.J., on Oct. 12, 1955, to Nicholas DiNizio, who ran a waste management business, and the former Antoinette Gallo. He grew up nearby in Scotch Plains and graduated from Scotch Plains-Fanwood High School before attending several colleges, including Union County College in Cranford, N.J.; Seton Hall University in New Jersey; and New York University.

He worked as a garbage man for his father’s company while he tried to make it as a musician.

“I remember completing ‘Blood and Roses’ while on the back of a garbage truck, oddly enough,” he told Terry Gross on the NPR program “Fresh Air” in 2007.

Mr. DiNizio performed in Rahway, N.J., in 2016. Credit William C. King
“This is what I like about ‘Meet the Smithereens!’: It bridges the extremes of note-for-note fidelity and pure interpretation, offering the best of both worlds,” the critic Allan Kozinn, author of “The Beatles: From the Cavern to the Rooftop,” wrote in The Times in 2007. “The band has treated ‘Meet the Beatles!’ as a symphony, a complete cultural artifact, to be heard intact.”

Mr. DiNizio, who lived in Scotch Plains, also ran unsuccessfully for the Senate on the Reform Party ticket in New Jersey in 2000.

He was married and divorced and is survived by a daughter, Elisabeth DiNizio.

Mr. Diken, the Smithereens’ drummer, said in an interview on Wednesday that the group last performed together in September. They had been working on new material for an album and had planned a tour for 2018. He said that even after decades together the Smithereens remained enthusiastic and “always played like we were 18.”

“We saw the world together,” he said, “shared a deep friendship and realized our childhood dream of playing in a rock ’n’ roll band.”