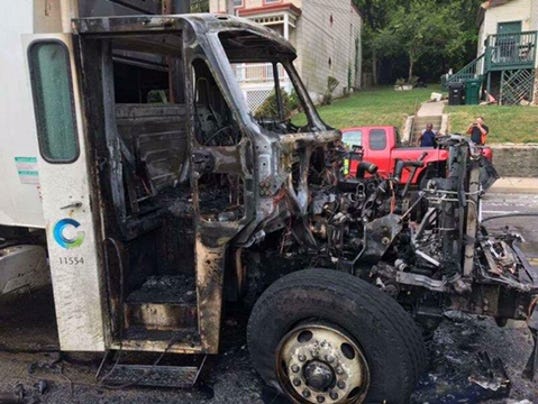 Maurice Brown, local president of the public service workers union AFSCME, said the driver and helper in the truck noticed problems with the vehicle, pulled over and called a city mechanic.

After examining the truck, the mechanic said it was safe to drive back to the garage, Brown said. But the trip didn’t go as planned. On Beekman Street near Westwood Northern Blvd., something went wrong

Brown said both workers were able to escape the blaze unharmed. The workers reported a second explosion came from the engine after they exited, he said. The fire was contained to the engine bay and passenger compartment.

Brown reported the truck is a 2011 model and had been in the shop several times as recently as last week.

The city’s public services department is investigating the incident and a representative from the manufacturer has been brought in to help determine what happened.

While uninjured, the worker did lose some of their personal belongings in the fire.

“At the end of the day, that is their office,” Brown said.