This man’s campaign against a bin, got neighbors mad!

When Steve Hofstetter’s neighbours decided to place a dumpster on a public parking space on his street they didn’t know what they were getting into.

The 38-year-old comedian admits he has become known for his “odd justice crusades”, and didn’t take a liking to the bin – or the handwritten note taped to it.

“Do not dump dog bags. Not a public trash bin,” read the note from the rogue bin’s owner – who Steve said he believed to be “owners or management of the building it was in front of”.

In reply, and to the delight of over 66,000 Reddit users where he posted the image, Steve wrote in a note of his own: “Your ‘private’ bin is taking up a public parking space. And thus, the public will use it how we please.”

Some Reddit users told Steve to just call the police about the issue, to which he replied: “But then where would I throw all my dog s***? Decisions, decisions.”

The journey was far from over at this point though. The dumpster-dumper’s response was to take down the note – but Steve was ready with another.

“I see that you didn’t like my sign. Guess what? I used some of your tape! You threw out your own tape! Sucker! Also, move this trash bin and avoid Reddit for maybe a week or so,” wrote Steve, again signing off with a love heart.

Then someone else joined in. 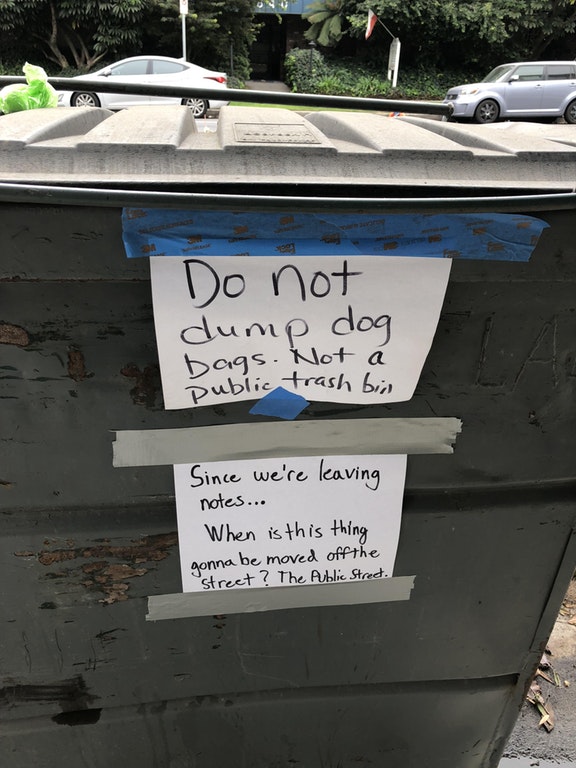 “Since we’re leaving notes… When is this thing gonna be moved off the street? The public street,” read the third sign, from an unknown actor in the dumpster debacle.

It would prove to be the finale in an epic tale of wills, pens and tape – Steve returned to find the bin had indeed been removed, 12 days after he posted his first note and two months after the dumpster first appeared.