Released from its military contract obligations, Leach ramped up production of the Refuse Getter bucket loader following the war. Though sales would remain strong, there was good reason for Leach to avoid complacency. Gar Wood Industries had introduced the all-hydraulic Load-Packer rear loader in 1937, which was becoming increasingly popular as more and more American cities ‘mechanized’ their collection fleets. It was probably obvious that bucket loader designs would never seriously challenge Gar Wood as demand for true compactor-type bodies grew. The future of refuse collection would assuredly be in the hydraulic packer.

As an interesting side note, Leach already had been assigned two patents for rear load packer trucks during the war years 1942 and 1943. The similar designs of Carl Mott (2371540) and Herman Lee (2335155) were for two-panel packers very similar to a Gar Wood design…of the future! Lee’s patent was the closest, almost a dead ringer of the Gar Wood Load-Packer 500 that would appear almost a decade later. These appear to be viable designs, particularly for their day; Gar Wood certainly was able to parlay their version into a successful product during the 1960’s. However, Leach passed on actually building these designs, and instead started from scratch in 1946. Perhaps E.C. Leach had thought of the Refuse Getter, and wanted the new body to emulate that simple, clean design. He turned over the task of designing the next Leach refuse truck to his chief engineer. 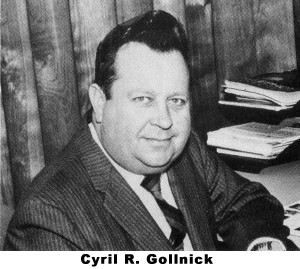 Cyril R. Gollnick, who possessed no formal engineering degree, had joined Leach in 1942. Within about one year, Gollnick produced a design which was to be sold as the Packmaster. It was an all-hydraulic rear load packer, the first models appearing in 1947. The Packmaster was the first of two landmark Gollnick designs which would ultimately catapult Leach to a position of industry leader, and radically change the state of the art in the industry as whole. Even these early Packmasters, primitive though they may be, more closely resemble the modern rear loaders of today than any of Leach’s competitors of that time. This is a lasting tribute to both Cyril Gollnick and the Leach family.

But with vision comes risk, and introducing any new product concept may often take years to mature and achieve a strong market position. At Elgin Sales, George Dodge and Andy Anderson were initially skeptical, since they already had a simple and reliable product (The Refuse Getter) which was selling better than ever. The Packmaster was bigger, heavier and more complex…and more expensive. The Refuse Getter was not abandoned, and would be available at least through the end of the 1940s, selling alongside the new Packmaster. By 1950, it was probably clear to everyone that the Packmaster was the truck of the future, and could compete toe-to-toe with the Gar Wood or any other packer.

Amongst batch-loading refuse packers, Packmaster was the first to include two critical design features which are with us to this day. First, it utilized an oscillating, hydraulic powered packer panel. That is to say, the packer started from a position high in the front of the tailgate, and traveled throughout the structure to sweep and pack the refuse. Prior to this, the the school of thought on rear loaders had mostly relied on pivoting panels, as exemplified by the well-known Gar Wood and the Sicard Sanivan. The pivoting panels severely limited the hopper size to the arc of their travel, and by design necessitated that no refuse could be loaded during the packing cycle. Only after the cycle had completed, and the panels had returned to their starting position, could loading again commence. This was also true of side loaders of the era as well. But with the Packmaster method, the hopper could be reloaded at the halfway point in the cycle, when the blade started to lift and pack the refuse into the body. This was a major advance; and would lead to the industry practice of measuring reload time, which is today a common specification for refuse packers.

The other feature was a direct result of the oscillating packer blade. The Packmaster had the first truly low and deep hopper. The long hydraulic cylinders that powered the blade could “reach down” farther than the swinging panels of competitive designs. With the Packmaster, a hopper sill substantially lower than the truck frame was now a reality. Gar Wood’s Load-Packer, their biggest rival, had relatively high loading height and shallow depth, as a result of its swinging door packer panel. Sanivan was only slightly better in loading height, but added severe disadvantages in safety and was far more complex. A low hopper sill, at least among North American designs, would become another standard by which rear loaders were measured. 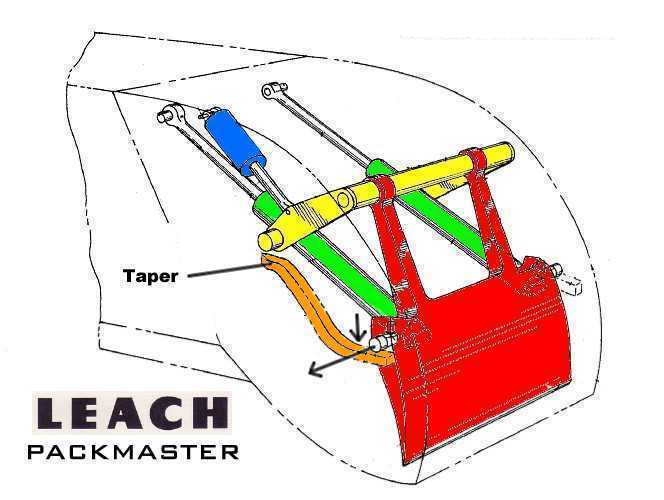 (Representative drawing, for illustration purpose only)

Referencing the drawing above, it can be seen that the packer blade (red highlights) was similar to a bulldozer with two large double-acting hydraulic cylinders (green) providing direct pull. Packmaster had ample crushing and packing power, capable of breaking a 2 x 4 against its hopper sill. Blade control was by a novel combination of swing links (yellow) to stabilize the upper arms of the blade, and a track and roller arrangement (orange) on the lower end which guided the blade during the end the cycle. The rollers were spring biased, being forced to extend outward to lock into the recessed tracks once the blade descended to its lowest point behind the load. When the blade reversed direction, the rollers then followed the track, guiding the blade up and into the body. At the upper end of the ‘s’ shaped tracks, tapered risers forced the rollers to retract inward, ready for the next cycle. A hydraulic holding cylinder (blue), attached to the left hand link was used to keep the blade from falling downward at the start of the cycle as it opens rearward over the loaded hopper. The earliest models may have used a friction brake on the link pivot shaft, as described in Gollnick’s 1949 patent, but the majority of Packmaster production appears to have been built using the holding cylinder.

Gollnick’s design, while a landmark engineering achievement, was not an overnight sensation. Particularly limiting, at least in hindsight, was the narrow hopper width and smallish one cubic yard hopper capacity. One possible reason for this may have been a desire to provide ample room for riding steps, and the Packmaster had this plus a large safety grip railing. Rivals Gar Wood and Sicard had similarly narrow hoppers, so this aspect of the Packmaster probably didn’t hurt Leach at the time. The early Packmaster also featured a inwardly folding, two-piece hopper door which was automatic; The pack cycle commenced by lowering the door which, when fully closed, activated the packer blade to begin its movement. Once the blade reached the halfway point and began its ascent back into the body, the door automatically opened to allow for reloading. Though a laudable safety feature, it added complexity to the mechanism. Overfilling the hopper could easily result in refuse being trapped between the packer blade and the door, causing an incomplete packing cycle or damage to the controls.

It was 1949 before the Packmaster was first mentioned in the trade publication American City Magazine, the same year the first approved patent was filed. Over the years, advertisements for the Packmaster were virtually non-existent. It gained its reputation through on-the-job demonstration, and the determined efforts of the Elgin sales force and Leach distributors. Body sizes were 9, 12 and 15 cubic yards initially, with a 20 yard version added later. The body sheet metal is visually very similar to the later model Refuse Getter, and the rounded edges of the body are unique to the first generation Packmaster models. For unloading, twin single-acting cylinders, located inside the body, raised the tailgate and a large double-acting ram hoisted the body to dump. On the 15 and 20 yard bodies, a single-acting assist ram helped to raise the body.

From 1947-1954, many minor improvements had been made, and sales began to increase as it gained a reputation as a powerhouse packer. A total of 360 units were sold during 1953, and many municipalities were building fleets of Packmasters. Fleet users were reporting record setting payloads, and unofficially, a new measure of refuse packer performance was begun; pounds per cubic yard. This seems to have been initiated by users, who would compare weights of their open dump trucks with newer packer trucks. Iowa City, Iowa was an early buyer and reported payloads of over 500 pounds per cubic yard with their Packmasters during July of 1953. As it turns out, this figure, phenomenal as it was at that time, was only the starting point for Leach.

Leach was building a formidable distributor network, and Elgin even had an international sales division (Elinco) taking overseas orders. Onnie’s son David Leach joined the company in 1953, marking the third generation of the Leach family to come on board. Meanwhile, E.C. Leach, who had been president for over three decades, decided to sell the company in 1953. Intending to sell Leach to a competitor, he agreed instead to sell his controlling interest to his brother Onnie. By January of 1954, Onnie had completed the buy-out and became the third president of Leach Company. Elgin Sales, who had been Leach’s longtime national distributor, bought-in to the company at this time, and together they formed what would be called the Elgin-Leach company.

It turned out to be a very good move; with a solid product line, Leach was poised for growth in the next half of the 1950’s. As good a product as the Packmaster was, big changes were still to come, and it’s doubtful that even Onnie could have predicted the fantastic success Leach would enjoy in the near future.

Longest Lasting Line of Rear Loader Products – EVER – As we all know, Leach™ has been the number one manufacturer of rugged rear loaders since 1932. With more than 50,000 rear loaders on the road today, Leach™ has more products than any other brand in the marketplace. No other rear loader can match the reliability and functionality that Leach™ brings to the table. Today, we continue to reinforce that position with best-in-class models offering the same legendary design and construction that the industry has come to expect from the Leach™ brand. Both Leach™ models offer a performance profile precisely suited to your collection needs. To survive in today’s highly competitive market; trucks must be tough, reliable, and user-friendly. Leach™ rear loaders are designed to improve every aspect of your operation.

Leach™ knows you demand the most dependable rear loader there is, and our trucks are engineered and manufactured to perform better, faster, and longer than anything else out there. When you buy a Leach™ rear loader, you get a stronger body to collect and transport, the biggest hopper available in the market, “smart hydraulics” for better, faster packing cycles and a smarter, more efficient open-and-eject process. We make sure you get it all!