A Hero With Papillion Sanitation Workers

For most people, the garbage goes out at night and the next morning, it’s gone. 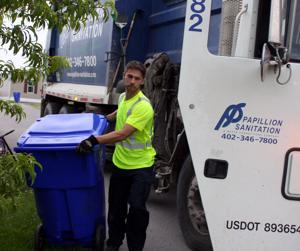 Blake Kendall stops his truck to pick up four totes during a recent May route.

Seems like a simple process, but the day in the life of a garbage collector is far more in-depth.

Blake Kendall has been a garbage collector with Papillion Sanitation for more than a year. He started as a rear loader — one of the workers who rides on the back of the truck and loads everything by hand. About 10 months ago, he became a driver.

“It’s the most stressful and difficult job I’ve ever done, but I love it,” Kendall said. “Before I started working here, my respect for garbage men was nowhere near what it should have been.”

The day for a collector begins around 5:15 a.m. each day with a safety meeting before they hit their routes. Once they have inspected their trucks and added fuel, the collecting begins.

For Kendall, his route takes him all over Sarpy and Douglas counties during the week. He hits the Valley area on Monday, Elkhorn and Waterloo on Tuesday. Wednesday through the rest of the week, he’s in the Papillion and La Vista area. Monday through Wednesday, he averages about 150 miles per day while on Thursdays and Fridays, that number drops to around 100.

Although he might have a supervisor ride with him on occasion, most of the time he is one man and a truck.

“Driving is a big part of the job,” he said. “I end up talking to myself a lot.”

His residential routes take up the majority of his time. He might find himself stopping and going every few hundred feet.

Some totes, which have replaced the old steel garbage cans, can easily be lifted into the truck with a mechanical arm. The arm, which is operated with a joystick inside the truck, can lift up two tons and easily lifts the totes above the truck and empties the contents.

“I get a lot of practice for the claw arcade game,” Kendall said. 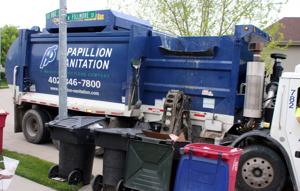 He says the claw generates a lot of attention from the neighborhood.

“Kids and grown men really love the claw,” he said. “They’re amazed how easily it can pick stuff up.”

But not everything can be reeled in by the claw. Stray bags or other items require good old-fashioned elbow grease, which means drivers have to exit their trucks frequently to grab items. Kendall said having the lid side pointed out and having bags properly tied can make the task a little easier.

The constant movement, along with the jostling in the truck, can make for a long day.

“I don’t have to go to the gym because this keeps me in shape,” Kendall said. “You never meet a garbage man who doesn’t have big calves. Everybody hurts doing this job. If you want cartilage when you’re older, being a garbage man is probably not for you.”

Driving a truck in and out of neighborhoods can be a challenge as well. Along with normal traffic, there are school buses, garage sales, moving trucks and other sanitation trucks that can make a tight fit even tighter.

“You’re taking heavy machinery and driving through people’s neighborhoods,” Kendall said. “The general driver doesn’t always watch out for us, but construction workers and other sanitation guys, they’ll watch out for you. Nobody likes to stop behind the trash guy. There’s a lot of tight corners and backing up.”

All the drivers are in constant contact with dispatch throughout the day, alerting them of their whereabouts and if they have run into any trouble.

Kendall said they average about three hours of trash pickup before the truck is full and needs to be emptied at one of two landfills. If it’s raining, the truck fills up sooner because wet garbage weighs more.

A normal route for Kendall will have him grabbing about 1,000 totes each day. On a good day, without any breakdowns, he wraps up around 5 p.m. Drivers are not allowed to be on the road for more than 12 hours in a day.

Neither rain, nor sleet, nor snow, nor holidays can stop garbage collection. If they take a holiday off or have to miss a shift because of weather, they pick up a Saturday shift to stay on schedule.

“If someone breaks down, you help them out on their shift,” Kendall said. “You have to hustle if you want to get home and see your family.”

Kendall said the hardest thing to get used to, other than learning to drive with the steering wheel on the opposite side, was the smell.

“It does not smell good, but you get used to it,” he said. “On hot days, the only thing that smells worse than garbage is a hog yard.

“My wife knows how bad it is. There are days when I get home and she points straight to the shower.”

Kendall said his perception of a garbage man has changed over the last two years. He hopes his job casts a positive image on the public.

“We try to be likable guys,” he said. “Some people don’t appreciate us and it can be infuriating the way they treat garbage men. But some people will go out of their way to wave to us and be polite. I even had one lady on a route who used to bake items for me.”

Like any job, being a garbage man has its ups and downs. But when it’s all said and done, Kendall and many others in his profession are proud of the work they do.

“The stress of the job and the long hours can be hard on relationships and telling someone you’re a garbage man isn’t always a great date opener,” he said. “But I like the job and I find it fun. At the end of the day, it’s a sense of accomplishment. It’s honest, hard work. When the day is over, you can see all that you’ve done.”